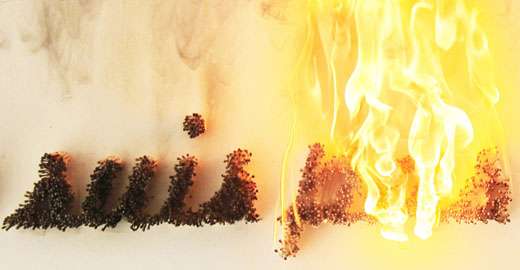 Romina S. Cortellucci — July 23, 2012 — Art & Design
References: alicherri & dejoost.nl
Share on Facebook Share on Twitter Share on LinkedIn Share on Pinterest
Using hundreds of matchsticks, the Ali Cherri 'Le Pyromane' addresses the subject of violence. The installation was created by the Beirut-born visual artist and designer Ali Cherri who is known to use video, installation, performance, multimedia and print. Cherri made this work as a response to those who use the act of self-immolation as political protest. And, more specifically the actions of the Tunisian street vendor Mohamed Bouazizi on December 17, 2011.

Out of desperation, Bouazizi covered himself with paint thinner and lit a match. This action sparked the Tunisian Revolution and later uprisings across the Arab world known as the Arab Spring. A moment that both horrifies and intrigues Cherri, he began questioning what would allow for a human to reach such an extreme political statement.

The matchsticks created by Cherri spell out, "I am not a pyromaniac," stating that the act was not due to the impulse control disorder that uses fire but instead a much deeper action.
0.9
Score
Popularity
Activity
Freshness
Attend Future Festival Virtual