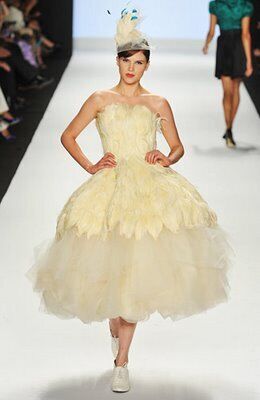 The gallery shows the new Spring and Summer 2009 Alexander McQueen feather wedding dress contrasted with that of the Project Runway season 5 episode 13 gown. The side-by-side is in the second image.

Speaking of Alexander McQueen, did you hear they laced the girls up so tightly at Paris Fashion Week that one of them fainted due to an overly cinched corsette? Surprisingly, she made it off the runway in time; after doing her turns, 19-year-old Australian Abbey Lee Kershaw passed out backstage.

The Wall Street Journal even said Alexander McQueen’s clothes “were so body-hugging that models’ bones protruded through the clothes awkwardly, causing some discussion in the audience.”
6.6
Score
Popularity
Activity
Freshness
View Innovation Webinars