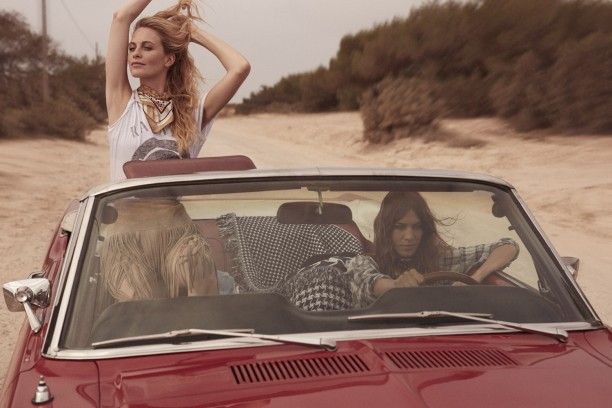 Vasiliki Marapas — July 8, 2014 — Pop Culture
References: net-a-porter & becauseimaddicted.net
Share on Facebook Share on Twitter Share on LinkedIn Share on Pinterest
Alexa Chung and Poppy Delevingne star in the latest issue of The Edit by Net-a-Porter. The two friends don Western-inspired looks as they engage in a cross-country roadtrip. The images portray the girl's boundless glee, their rapacious appetite for adventure and, best of all, their obvious fondness for one another.

The accompanying article details how the two met, a decade earlier, in the waiting room of Storm Model Management. The two continued to cross paths at photoshoots and fashion events, and eventually they became more than just a friendly, familiar face in what one might refer to as a "tough crowd."

There is much to admire in each of these women -- Delevingne's sparkling, persuasive personality and eye for fun; Chung's people-pleasing charm and boy-crazy character -- and the fact is not lost on either of them.