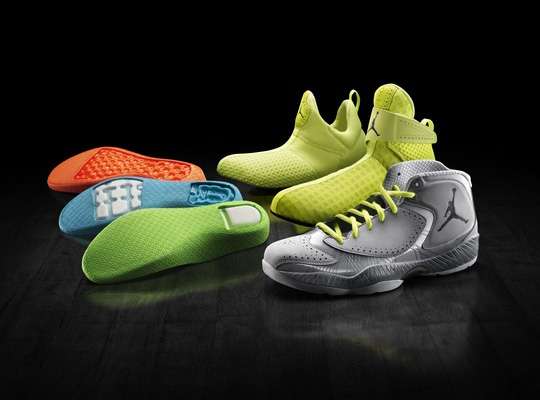 Taylor Keefe — February 8, 2012 — Fashion
References: nike & highsnobiety
It's hard to believe that the Jumpman brand is still churning out kicks, but the anticipated release of the Air Jordan 2012 sneakers shows that the brand is doing better than ever. This is the 27th shoe released in a collection that has spanned into its fourth decade.

When it comes to timeless shoes, the Air Jordan 2012 kicks reaffirms Jumpman and its cousins over at Nike as patriarchs of the sneaker industry. The Air Jordan 2012 shoes are quite ingenious, featuring breakthroughs that will have sneaker addicts fiending for a pair of their own.

Firstly, the shoes come with three interchangeable midsoles, putting an emphasis on customization and performance when it comes to athletics. Secondly, there are two sleeve modules that can be easily replaced, allowing athletes to switch up the look from mid-top to high-top. Finally, the six different configurations will give athletes the opportunity to customize performance on-the-fly.
5.6
Score
Popularity
Activity
Freshness