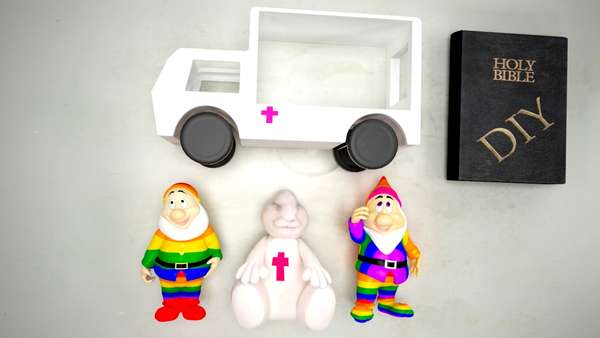 tomas marussiac — July 18, 2011 — Art & Design
References: marussiac.cultcode & marussiac.cultcode
Share on Facebook Share on Twitter Share on LinkedIn Share on Pinterest
The most important Marussiac artwork from recent times are: 'Lara’s Gender Solutions' and 'Euthanasia Christian Alien.' On the bookshelf is a small plastic statue of “Lara’s Gender Solutions”. Hollywood female sex symbol Lara Croft is inconsistent with her behavior of man.Marussiac solves this problem through his own way of creating a "male symbol" for her.

Another example of Marussiac's work is the artwork 'Euthanasia Christian Alien' which questions: “Are there aliens?” and “Believe aliens in God?” But rather than answering them directly, Marussiac leaves these questions to die implying that questions are dangerous.

Conceptual Art
Curiosity in a Box