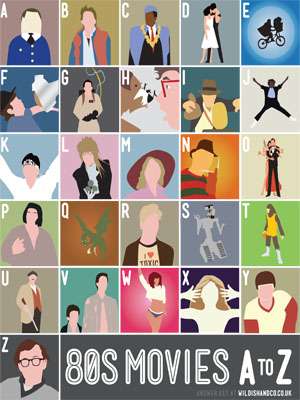 With the use of classic 80s cinematic movies including Back to the Future, Dirty Dancing and Indiana Jones, this shirt creates its own alphabet using iconic film titles. Each of Wildish's cotton shirts features 26 film or character references that represent the 26 letters of the English alphabet. Featuring a blocked, minimalist style, this shirt will look casual, yet chic when paired with a jean jacket, slacks and traditional oxfords.

Avid fans of the 80s -- myself included -- can proclaim their unshakable love for the iconic era of John Hughe's classics Sixteen Candles and The Breakfast Club. Use the 1980s Film Alphabet Shirt by Stephen Wildish to test your knowledge 80s cinematic culture and prove your devotion to that decade.