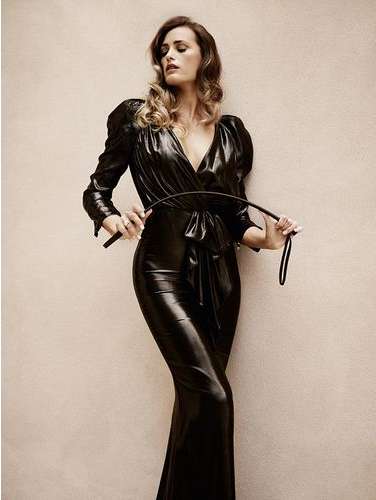 Amelia Roblin — October 15, 2011 — Naughty
References: bryanadamsphotography & fashioncopious.typepad
Everybody has a dark side, even if it dwells in the most distant corner of your mind, and Yasmin Apres la Nuit reveals one woman's vice, in the form of her evening persona.

Photographed by Bryan Adams for the October 2011 issue of L'Officiel Paris, this provocative collection of pictures unveils the vixen inside of model Yasmin Le Bon. A mix of images capture her in a black and white and a subdued sepia color scheme, embodying a refined sophistication in some, a sensual sexuality in others, and finally an overt eroticism in several of the shots.

Beneath the white collars, the shoulder pads and the buttoned-up blouses evidently exists a fierce femme fatale who maintains her polished gracefulness despite the acquisition of a whip and a revealing wardrobe change. Yasmin Apres la Nuit frames elegance, intrigue and allure.
6.4
Score
Popularity
Activity
Freshness