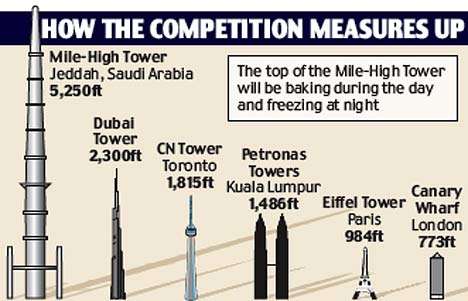 Ben Preiss — April 1, 2008 — Art & Design
References: skyscrapercity & dailymail
Share on Facebook Share on Twitter Share on LinkedIn Share on Pinterest
The big building competition in the Arabian Peninsula is really heating up with a really ginormous tower just announced for Jeddah, Saudi Arabia. Although we revealed this project would be under construction, we didn't know where it would be built.

The plans show it will be twice as big as the already humungous Burj Dubai which is being completed to about 160 floors. The $10 billion project is backed by Saudi billionaire, Prince al-Walid bin Talal, who bought the Savoy Hotel in London for £1.25 billion in 2005. The Prince's company, Riyadh-based Kingdom Holdings, teamed with Hyder Consulting and Arup for the project.

"The tower will have to be capable of withstanding a wide range of temperatures, with its top baking in the desert sun by day but dropping to well below freezing at night," the Daily Mail says.

"To resist the strong winds prevalent in the area and stop it swaying, giving its occupants a form of high-rise seasickness, it will be fitted with a giant computer-operated damper."

"Two 'mini-towers' - both taller than Canary Wharf - will be built on either side of the main tower."

The technical challenges in building a tower this big are staggering.