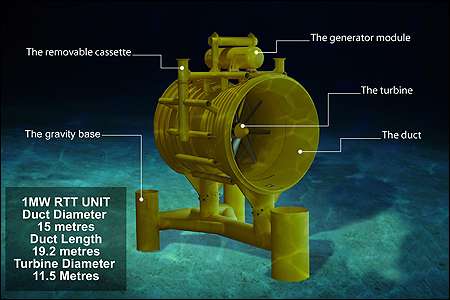 Each of the huge 1 MW turbines that will be used for that project will be 15 meters in diameter and over 19 meters long. Due to their size, the turbines will be placed in deep water to avoid endangering ships. Expected to be fully operational by 2015, the project would provide enough energy to power 200,000 homes. This new power scheme is also expected to have less environmental impact that traditional tidal power installations, known as "tidal barrages", which, according to the Telegraph, "take away mudflats important to birds and impede the passage of migratory fish such as salmon, shad and eels."