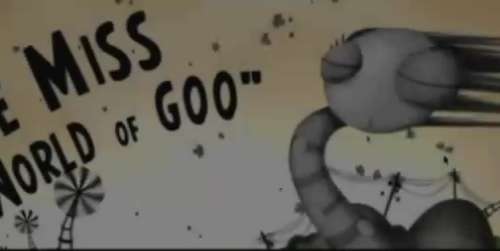 'World of Goo' Will Turn Any Engineer Into An Addict

The game itself is nothing but a physics simulation, a virtual erector set, if you will, wrapped in an astonishing aesthetic, mostly unintelligible plot and a soundtrack that would make Danny Elfman weep. The game is divided up into four chapters and an epilogue, with between 4 and 15 individual games in each chapter.

Each game has its own unique landscape, populated with Goo balls in a variety of species, from basic black spheres with eyeballs (and an adorable chirping noise) to chewed-Bazooka balloon goo balls to drippy, drooly goo balls. Each species has its own relationship to physics, and all you have to do is manipulate their heft, stretch, bounce, and strength as you use them to build structures that will deliver the species into the mysterious vacuum pipe.

Did that make sense? Probably not so much. As I’ve been trying to describe to my friends what has finally changed my mind about video games, I’m at a loss on how to give 'World of Goo' the so-called Elevator Pitch. The greatest asset of this game is that it’s built to teach players the rules by taking them through a logical process that gradually becomes more challenging.

The replay value is so high because after you beat the entire game (it took me about 3 weeks), you can start all over and challenge yourself to build stronger, more efficient and more beautiful structures. They also have an Obsessive Completion Distinction Criteria (OCD) for each game, so you can go happily insane trying to meet their standards for time, moves, or goo balls collected.

Judging by the wealth of videos on YouTube showing off cheats and alternative solutions, 'World of Goo' for the Wii and PC has a speedily-expanding following of men and women both young and old. I am keeping my eye out for the next development from 2D Boy.
0.7
Score
Popularity
Activity
Freshness
Attend Future Festival