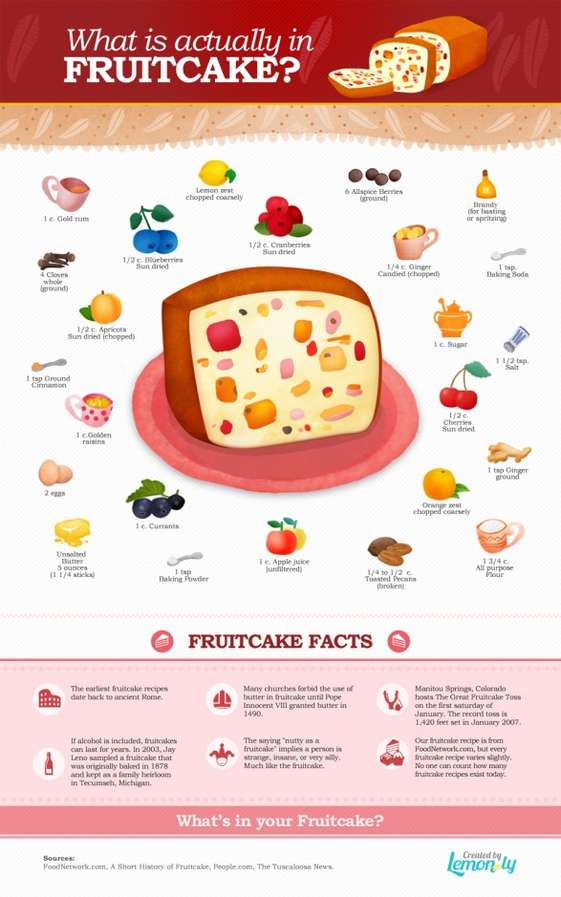 The What is Actually in a Fruitcake Infographic Demystifies the Dessert

Susan Keefe — December 30, 2011 — Lifestyle
References: visual.ly & holykaw.alltop
Share on Facebook Share on Twitter Share on LinkedIn Share on Pinterest
The curious people at Visual.ly chose to explore the culinary paperweight Fruitcake in their informative infographic entitled What is Actually in Fruitcake. The butt of many holiday jokes and often a front runner for worst present of the year, the Fruitcake simply cannot catch a break. With few supporters in popular culture, this fruit-studded dessert has a bit of a bad rep, to say the least.

Often inspiring fear in its would-be eaters with its astounding longevity, the fruitcake is often dismissed as a stale, old and possibly deadly morsel. In reality, the fruitcake is a moist, expertly preserved ancient culinary practice dating back to Roman times. The fruitcake includes a butter-rich cake studded with dried fruit plumped by frequent doses of rum. The alcohol preserves the fruit and cake, so that if the dessert is left in a dark cool place it can literally last for years. Some fruitcakes have been said to last for hundreds of years.

Informative, surprisingly delicious and oddly engrossing, the What is Actually in Fruitcake infographic may change your mind about this much maligned festive cake.
2.5
Score
Popularity
Activity
Freshness
Jeremy Gutsche Keynote Speaker