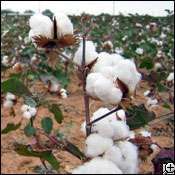 Djemal — November 22, 2006 — Eco
References: dsc.discovery & press.jrc.it
Share on Facebook Share on Twitter Share on LinkedIn Share on Pinterest
The only reason we haven't been able to eat cotton to date is because it is toxic to humans; though that doesn't stop it from being fed to cattle (with their iron-stomachs) and of course, being used as a primary source of fashionable clothing for you and me.

Well all that is about to change as researchers at Texas University have managed to genetically modify cotton to produce an edible food from cotton crops.

â€œKeerti Rathore of the university's Institute for Plant Genomics and Biotechnology said the modified plants continue to have gossypol [the toxic substance] in their stems and leaves where it helps resist insects, but the chemical is significantly reduced in the seedâ€.

â€œWorldwide, 44 million tons of cottonseed is produced annually. Cotton is grown in 80 countries, and the seeds are 23 percent protein, Rathore said. They are pressed for oil, and in the United States about half of the remaining meal goes into animal feed, he said. But, with the gossypol removed, the meal can be ground into flour and used in cooking, he saidâ€.

With the toxic element removed, the high protein cotton seeds can be round into flour and will most probably find their way into your meals.

However, I don't envisaged that there will be a stampede for the new cotton food with some things best left to the scientists; not matter how much they try and convince you otherwise with claims that the food 'tasted good'.

The researchers continue to highlight potential uses of cotton food and point to Africa, as an example of somewhere where the GM cotton seeds can be used to feed farmers as well as their livestock. Still doesn't sound that appetizing does it?
3.3
Score
Popularity
Activity
Freshness
Jeremy Gutsche Keynote Speaker