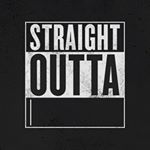 Christopher Magsambol — August 14, 2015 — Tech
References: straightouttasomewhere & inquisitr
Share on Facebook Share on Twitter Share on LinkedIn Share on Pinterest
The upcoming movie 'Straight Outta Compton' recently released a brilliant movie-inspired meme generator that quickly became a viral sensation on the Internet. In using the basic template of the movie poster (based on a 1988 NWA Album), users can upload a picture and fill in the last word after "Straight Outta."

Instagram, Facebook, Twitter and other social media sites have blown up with a wide variety of "Straight Outta" renditions, many of which are highly personalized, while others are comical and hilarious. The meme generator was created by Beats by Dre, a company owned by former NWA member Dr. Dre. Many musicians have been participating, proudly representing their home cities.

Some of the Straight Outta Compton memes have surpassed 100,000 likes on Instagram in just a few days.
5.7
Score
Popularity
Activity
Freshness
Get the 2021 Trend Report FREE