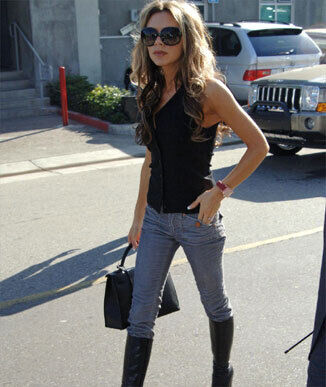 Bianca — November 12, 2007 — Pop Culture
References: thebosh
Apparently, skinny isn't so spicy anymore. Spice Girl Victoria Beckham has been asked to put on a few pounds for the group's world tour. Beckham, or Posh Spice, has been the source of many anorexia rumors, and target of media criticism regarding her 00 frame.

The tour kicks off in December, so Posh will really have to nosh on some high calorie meals if she wants to meet her goal before then.

"Vic is under orders to have at least five small meals a day, to get her body prepared for the tour. She isn't too happy about the plan but understands that it's necessary if she's to stay healthy and not burn out over the coming months. It's a pretty intense - not to mention bland - regime but it's essential she sticks to it," a source told the Mirror's 3AM Girls.

It's expected her diet will include brown rice at all three meals -- yep, breakfast too.

"This time around, Posh understands that the key is about getting stronger and if this means putting on an extra pound or two, so be it," the source said.

Now that she is going on tour with the Spice Girls, Posh will once again capture the attention of younger audiences, and for that reason, she has been urged to add a few pounds as not to be a poor role model for younger girls.

The last image show a comparison of Victoria now and back in the 90s. Some people might see a dramatic difference, but I don't. She's always have a petite frame, it just looks more extreme now that she has enormous implants. If Victoria is naturally slim, it's just as unhealthy for herself to force on the extra pounds -- not a good message to spread to impressionable young girls either. It's a tough industry, and hard to know what's right.
6.3
Score
Popularity
Activity
Freshness