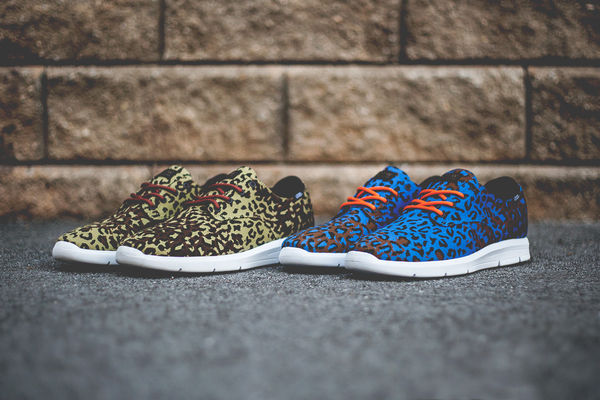 Thomas Wade-West — October 16, 2013 — Fashion
References: hypebeast
When most people think Vans, the first thing that comes to mind is skateboarding, surfing and other extreme sports, but Vans has now shifted to manufacturing a sneaker that is also suited for the gym with the Vans OTW 2013 Holiday Prelow 'Leopard Camo.' This series is featured in two distinct 'Leopard Camo' colorways, and borrows a midsole that would be very fit for running or jogging.

The Vans OTW 2013 features a very minimalist running-inspired sneaker that boasts a sueded nubuck on the uppers. The sneaker is engineered with Vans' Ultracush HD outsole and a shock-absorbing Polyurethane foam mold that can be found on its skate sneakers. The interior features a soft neoprene heel fit system that locks the foot securely into place.

The two colorways offered are a blue and olive, alongside orange and burgundy laces respectively. Both sneakers features an all-white midsole.
4.6
Score
Popularity
Activity
Freshness