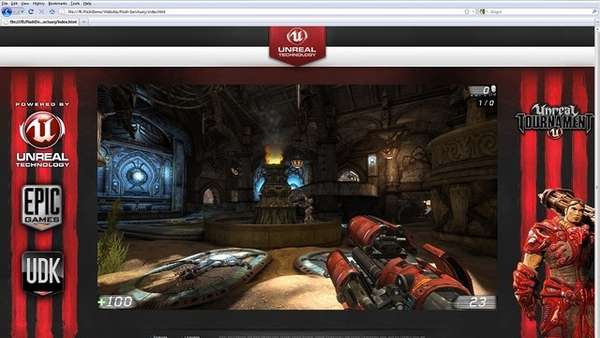 Omar Yusuf — October 5, 2011 — Tech
References: kotaku
Share on Facebook Share on Twitter Share on LinkedIn Share on Pinterest
Unreal Engine 3, the world's most popular 3D engine and among the industry's most powerful development tools, has had its innards economized to such an extend that its playable in web browsers. That's right! Say goodbye to FarmVille's cartoonish sprites and say hello to Unreal Tournament's visceral giblets and colorful explosions.

The technology that powers Internet browsers has advanced to such an extent that it can effectively harness the power of your computer, as opposed to being limited by Mozilla or Chrome's onboard visuals. Epic Games, the studio behind the world-renowned Gears of War, recently announced that a downsized, yet largely unchanged version of Unreal Engine 3 is supported by Adobe Flash. Though it's unclear when e-games will begin offering these spell-binding graphics, the mere possibility is encouraging.
0.4
Score
Popularity
Activity
Freshness
Get the 2021 Trend Report FREE