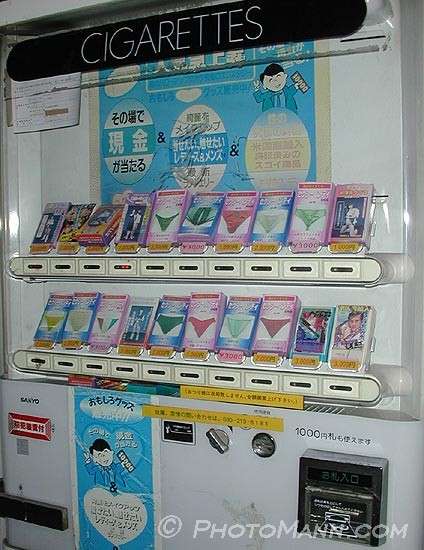 In Japan, Everything Goes

thischick — March 18, 2007 — Naughty
References: photomann
Share on Facebook Share on Twitter Share on LinkedIn Share on Pinterest
Since Japan has over 5.4 million vending machines, I wanted to know what couldn’t be bought from one. Apparently, not much. Most anything you can think of is available for purchase like, 10 kg bags of rice, fresh eggs, hot fried foods, live beetles, toilet paper, porn and yes, even “used Japanese schoolgirl panties”. Back in 1993 vending machines filled with used underwear “guaranteed” to have been worn by a real Japanese schoolgirl started popping up in large numbers. The police couldn’t do anything about it until they found a loop-hole in the Japanese antiques law. Used underwear as antiques?

Bizarre as it sounds, the law states used underwear is a “third-party” vendible and therefore requires the vending machine owner to obtain a license to sell the items. Since a license is not obtainable for these types of items, the police quickly shut down these machines and they have gained urban legend status. There are many people however; who claim that not all the machines have been shut down and underground used-pantie vending machines do still exist in Japan if you are “in the know” about where to go.
6.6
Score
Popularity
Activity
Freshness
Attend Future Festival Virtual