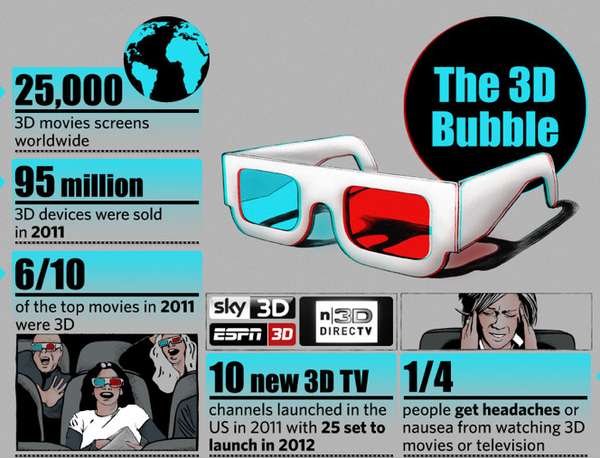 'The 3D Bubble' Asks if This Technology is a Passing Fad

Marie C. Hudson — December 26, 2011 — Tech
References: sortable & sortable
Share on Facebook Share on Twitter Share on LinkedIn Share on Pinterest
There's no denying that the film industry has seen many changes in recent years due to the increasing amount of 3D blockbusters, but as Sortable's 'The 3D Bubble' shows, the technology behind Hollywood's latest three-dimensional flicks isn't as recent as you may think.

The illustrated graph offers up interesting facts on the 3D film and TV craze, and also asks whether this technology will last, or is just a passing fad. While the first 3D film made its debut in 1922, it seems the craze only caught on in Hollywood with the release of James Cameron's 'Avatar' in 2009, and is now spreading to a wide range of film genres, including re-releases of classic animated Disney movies.

While I personally tend to opt for the standard 2D when it comes to films and TV, the urge to make the three-dimensional switch is tempting. If you're on the fence about the matter, check out The 3D Bubble for an array of interesting facts to ponder!
4.4
Score
Popularity
Activity
Freshness
Jeremy Gutsche Keynote Speaker