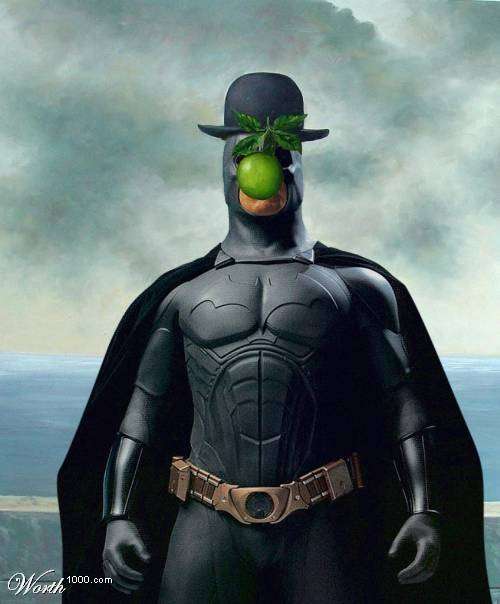 lourdes sanchez bayas — December 15, 2008 — Art & Design
References: worth1000
At a time when larger-than-life superheroes and villains have captured the imagination of the fashion world, the film industry and the general public, the fun and creative Photoshop website Worth1000, is running a very timely contest which blends superheroes with iconic Renaissance masterpieces.

As would be expected, Batman is by far the most represented fictional character in the contest due to the tremendous success of The Dark Knight. The first image is called “The Son of Batman” which is, off course, a Photoshopped reproduction of Belgian surrealist master Rene Magritte’s “The Son on Man."

The second reproduction in the gallery is called “Batman Mourning." Unfortunately, even though I have seen the original painting, I can’t identify its author. Next comes “Poison Ivy Pestering Batman Again." The clever and fun image that follows is “Spiderman."

The fifth image, which is called “Catwoman”, is based on one of Salvador Dali’s many surrealist paintings. Next in the gallery is “Hulk” which is a reproduction of one of Rubens’ painting named “Battle of Anghiari." Following Hulk is “The Death of Kent” which is a digital reworking of David’s Death of Marat.

Next we have a representation called “Spiderman and Doc Oc” which was inspired by a painting from the irrepressibly impious Salvador Dali.

The ninth reproduction is called “David X Men” which was, off course, was inspired by the world famous statue by Renaissance master Michelangelo.

The final reworked painting depicts Batman’s nemesis, “The Joker." This representation was inspired by one of Rembrandt’s many self portraits.
4.4
Score
Popularity
Activity
Freshness