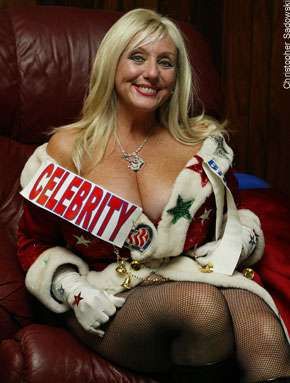 Essentially, Sondra Fortunato, the unofficial mascot of the New York Giants, is being asked to dress less sexy and make the switch from the skimpy attire she’s worn to games over the last 30 years to something more age appropriate.

Last Sunday, Sondra “arrived at the Meadowlands in a tiara, fishnets, a Santa outfit, a bathing-suit bottom and high-heeled boots.” She insists, “Nothing was showing, you couldn’t even see my underwear. I don’t flash!” She then went on to compare herself to Madonna after being asked to dress like a regular person and wear a sweater.

The final straw was when she brought in a suitcase filled with Christmas gifts and two 11x17 signs. Sondra Fortunato had already been arrested once in 2006 for carrying signs into the stadium, so she was quite familiar with the rules.
4.3
Score
Popularity
Activity
Freshness
Get Better and Faster