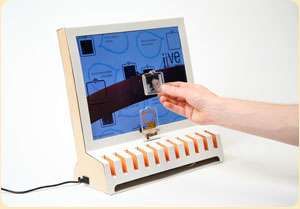 Pearl — May 26, 2008 — Art & Design
References: jive.benarent & designspotter
Share on Facebook Share on Twitter Share on LinkedIn Share on Pinterest
Jive is brilliant concept device to allow the elderly and technophobes without computers to still participate in a social network. Their needs are no different from the rest of us; the need to communicate, socialise and generally have fun is universal. Jive delivers through radio frequency identification (RFID) technology in order to store and retrieve data. There is a â€œtangible user interface - place something on the screen and the screen will co-respond to what you just did.â€

Jive is a â€œone-plug routerâ€ so all the necessary setup information is already inside it. The user just plugs it into the phone jack and turns on the power. The user places a friend pass in the device and any updates, news and messages will be displayed. The user is able to see aggregated information such as grandchildren who are on Facebook or who have uploaded pictures on a photo site. Messages can be sent with a pull-out keyboard. If Jive were used for targeting advertising, then the internet connection would be subsidised which is an important consideration given the target market.

Jive has been patented by British born Ben Arent, the inventor who amazingly came up this device as part of his Product Design Degree. The project goal was to create "the best communication device for the late majority" and keep them socially active in today's high tech world.

While some seniors avoid getting online, others are embracing it...