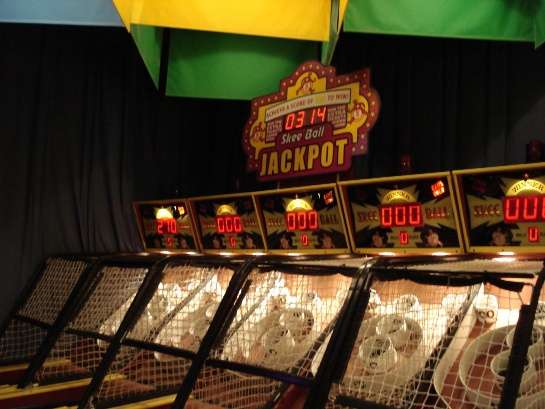 Chuck E Cheese Games Make it to the Big Leagues

They're re-introducing a game that you might remember from Chuck E Cheese's or your local arcade; Skeeball! According to VAVi, it is the â€œmost ridiculous league VAVi has ever offered.â€ Apologizing for not having put this together earlier, Marketing Director Latane Meade writes in the weekly newsletter that he â€œshould have realized the importance of acting like a 3rd grader when you are a grown adult.â€
The league, starting April 3rd, which goes by the name BoozeSkeeball, is played in coed teams of 8 at Dave and Busters in Mission Valley. The league consists of 5 one hour matches and one elimination tournament in week 6. Teams compete against 4 other teams at a time and the league can hold up to 25 teams. Teams will be wearing custom VAVi uniforms (headbands) and are challenged â€œto create innovative ways (e.g. team costumes, crazy signs, etc.) to make the event more funâ€. Sign-ups are predicted to sell out after local radio station's morning shows got excited and signed up.

VAVi, no stranger in the world of sports, has been around since 2002 bringing adults together by offering them adults sports leagues, fitness and dance classes as well as volunteer opportunities and social events.
â€œWe're not just about sportsâ€ assures Tyler Jensen, founder. â€œWe started VAVi as a fun way for young people to make friends and professional connections through something other than their office or the local bar scene. We know that it can be hard to meet people in a new city, so we decided to start a business that brought people together to have a little fun.â€ Interested players can sign up alone and will be placed on an existing team, or they can sign up with a group of people or a whole team. Sports are played at various locations all throughout the San Diego area.