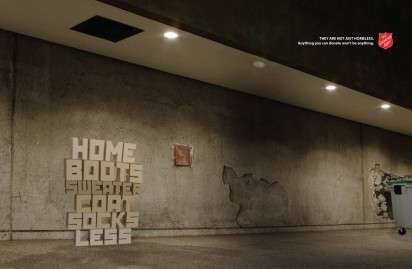 The Salvation Army 2012 Campaign Shows What the Unhoused Truly Lack

Meghan Young — January 16, 2012 — Marketing
References: jwt & ibelieveinadv
Share on Facebook Share on Twitter Share on LinkedIn Share on Pinterest
The Salvation Army 2012 campaign shows that the homeless don't just lack a home. Instead, they lack everything that tends to come with a home. As one of the print ads cleverly states, instead of homeless, these individuals can easily be termed "Home Raincoat Mattress Cardigan Gloves Scarf Less." There is so much involved in not just survival but also basic comforts these days, which the homeless are constantly deprived of.

Conceived and executed by Buenos Aires-based ad agency JWT, the Salvation Army 2012 campaign asks, "Anything you can donate won’t be anything," they will be everything. A simple campaign, it revolves around typical homeless habitats. In place of people, however, art director Guido Fusetti has used bold words that capture the true meaning of what it is to be homeless.
2.3
Score
Popularity
Activity
Freshness
Access Advisory Services