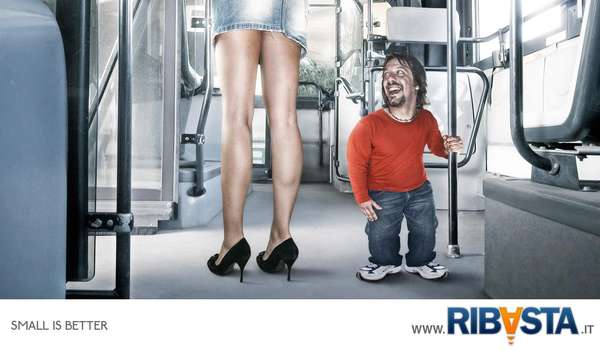 The ads feature different scenarios in which it pays off to be a ‘little guy’ with copy that reads, “Small is better.” The scenarios include breezing by the security at red carpet events because they can’t see the short guy between all these legs, and running through the open legs of opponents in a game of football.

After some Google translation, it turns out that the advertiser,Ribasta, is an auction portal, and ‘small’ actually refers to lower prices.

I don’t really think the ads communicate anything about the service or site itself. Unless you already know the site, it’s impossible to figure out that it’s an auction site. And I don’t know about you, but I don’t find the connection between short, or small as they put it, and low prices particularly witty or effective. But maybe I got lost in translation…