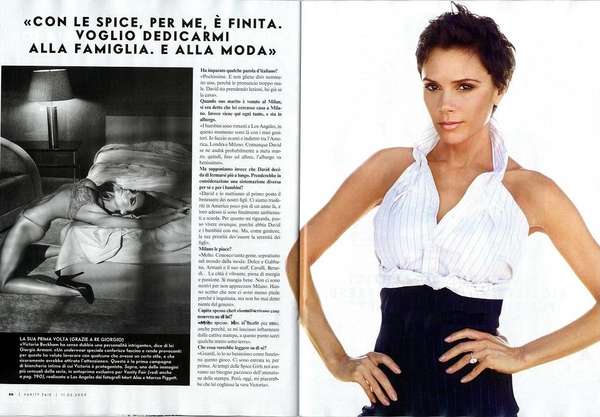 lourdes sanchez bayas — February 6, 2009 — Celebs
References: style.it
Share on Facebook Share on Twitter Share on LinkedIn Share on Pinterest
I don’t know whether Victoria Beckham has achieved that kind of first name recognition reserved for the very famous such as Gisele or Angelina, but she’s trying very hard. The mother of three, model, former singer, and entrepreneur will be the face of the February 2009 issue of Vanity Fair Italia.

Sometimes romantic in that exquisite wedding gown and at other times playing the role of a self-assured and androgynous but sexy woman, Beckham manages to showcase the two sides of her coin: the edgy androgynous side and the romantic, luxurious woman.

The photoshoot also includes an ultra-hot picture from Armani’s print campaign, in which both Posh and her husband David participated.

By the way, if these snaps look familiar, it is because two of them were recycled from Victoria Beckham’s January 2009 Harper’s Bazaar editorial.
2.6
Score
Popularity
Activity
Freshness
View Innovation Webinars