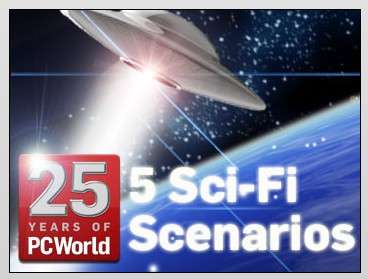 In order, they are:

â–  Biometric Security (2010) - This involves using fingerprints or iris scans or the like to do more than just gain access to a room. They will soon be used instead of passwords to gain access to web accounts or make purchases online. This one is believable. The only thing that would need to be commercialized for the home market are the scanners, but since they are already being used in other places, it shouldn't be that difficult to do.

â–  Space Tourism (2013) - If you consider "space tourism" to mean taking a sub-orbital flight aboard Richard Branson's Virgin Galactic vehicle, this one might have a chance at meeting that date. If you're thinking of space hotels, they have a long way to go.

â–  Holodeck (2016) - I have my doubts about this one. A relatively simple version projecting 3D images on the walls, floor and ceiling might be ready by then, but forget about the Star Trek version for quite some time.

â–  Self Aware Computers (2019) - Actually, given the rapid advancements typical of computer technology, this one might be believable. Then again, self-awareness may not happen at all.

And finally,
â–  Domestic Robots (2020) - Well, some of these actually already exist to vacuum your house, mow your lawn, and clean your pool. Now, if you're talking about the example MSN used, the Lost in Space robot, again, I think they have a long way to go. Unless scenario number four above happens that is.
1.6
Score
Popularity
Activity
Freshness
Get Better and Faster