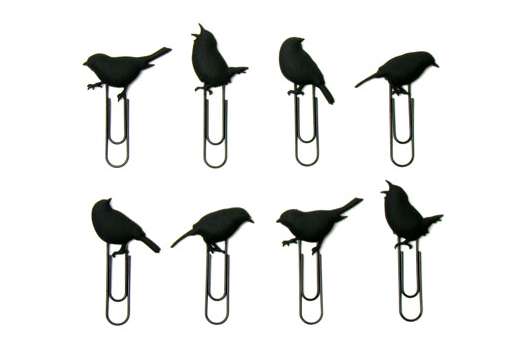 Amelia Roblin — June 3, 2012 — Art & Design
References: matomeno & notcot.org
These Puhlmann Bird Clips are the elite of office supplies, performing the tasks of lesser disposable metal paperclips and many more as well. They have been manufactured to assume a size greater than their conventional stationery counterparts, affording them extra abilities and emphasizing their delightful sculptural qualities.

There are at least four different versions of the fowl-topped fasteners featuring the sweet songbirds in a variety poses. Their little figures have been filled out slightly to create volume and a hint of three-dimensionality so that they seem to perch atop their ductile backings.

A particularly endearing effect is achieved when Puhlmann Bird Clips are used as page savers. With the catches out of sight, they look to roost on the top edges of novels. They're equally twee as card holders, lined up along slack strings as if they were power lines.
2.2
Score
Popularity
Activity
Freshness

Pricey Paper Holders
The 'Paperclip Money Clip' is Over the Top