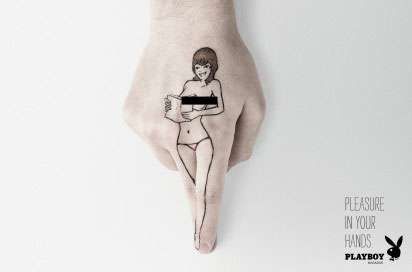 Meghan Young — June 18, 2012 — Naughty
References: neogamabbh.br & ibelieveinadv
Share on Facebook Share on Twitter Share on LinkedIn Share on Pinterest
The Playboy Magazine campaign erotically illustrates its tag line, "Pleasure in your hands." It centers around a male's hand, which has been sexily sketched on. From a scantily clad girl-next-door type to a topless burlesque woman, these drawings not only show the different kinds of women found between the pages of a Playboy magazine, but also various men they appeal to.

Conceived and executed by Neogama BBH, an ad agency based in São Paulo, Brazil, the Playboy Magazine campaign is both simple and creative. Art directed by Daniel Poletto with creative direction by Alexandre Gama and Márcio Ribas, the Playboy Magazine campaign was imaginatively illustrated by ODA Estúdio and photographed in studio by Marcus Hausser. With a slightly playful tone, the campaign is more than sexually appealing.
5
Score
Popularity
Activity
Freshness
Get Better and Faster