Socialites for President
Next
Set of
Related
Ideas 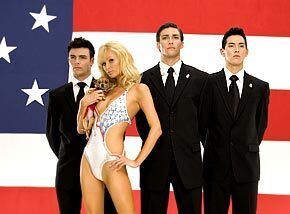 Despite Presidential Polls, Paris Hilton Says She Still Is In the Race

The video here is just a taste, a reminder that Paris Hilton is still here, still hot and having fun. So if you are tired of looking at the real presidential polls, check out Paris Hilton and remember that she got into the race because John McCain “the old white dude” used her and Nichole Richey in one of his anti-Barrack Obama ads.

She recently shot another spoof, appearing alongside with “one of the greatest fake presidents,” Martin Sheen, who played President Bartlet on The West Wing, as she herself declared she was running for “fake president.” With endorsements like that, who needs presidential polls anyways...
6.1
Score
Popularity
Activity
Freshness
Jeremy Gutsche Keynote Speaker