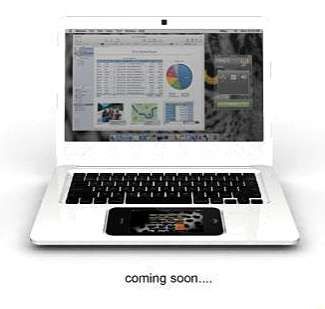 Olo updated their website with a photo of an iPhone placed in place of the computer trackpad area, possibly to allude to a multi-touch trackpad.

Due to association with the iPhone, the new Olo notebooks will have brighter, bigger screens than previous editions, and will have fully functional keyboards.

The Olo will build on the existing features of the iPhone, such as Bluetooth capabilities and filesharing applications while the iPhone is connected to a laptop.

This is more than most consumers expected Apple to come up with and is sure to be another profitable business product, given that the affordable price is very competitive.

Details regarding the Olo and iPhone partnership are still being finalized, but when released, the final product will surely stabilize the statuses of both companies as a powerhouses in their industries.
3
Score
Popularity
Activity
Freshness
View Innovation Webinars

100 Incredible Laptops
From Tablets With Handles to Sightless Literary Devices

24 Rad iConcepts
Since the iPad is Now a Reality, Will Any of These Designs Be Next?