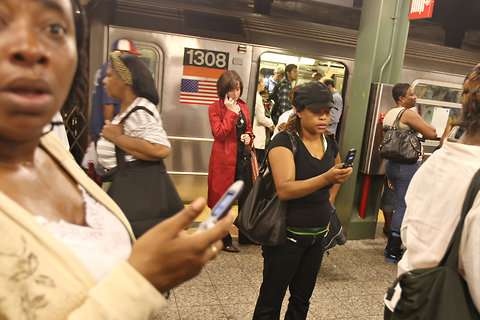 Omar Yusuf — September 25, 2011 — Tech
References: cityroom.blogs.nytimes & gizmodo
The announcement by the city municipality that NYC subways will provide cellphone service for underground commuters means that, with the exception of on (most) airplanes, you'll be able to text and make phone calls almost anywhere.

Dozens of feet beneath the New York streets and its pedestrians, separated by rebar and concrete, are the drab, depressing NYC subways. Fortunately for commuters, those metal subway cars won't seem so isolated and away from civilization for long. AT&T and Verizon customers will be able to browse the 'Net, send emails and chat away as they approach their destination. For now, the pilot project is limited to a handful of metro lines, including the 23rd Street C-E platforms. If you're not the type to talk it up via cellphone, you may have to plug your ears -- there'll be a lot more idle noise on the train.
1.1
Score
Popularity
Activity
Freshness

Subway Stop Touchscreens
The MTA in New York Introduces the 'On the Go! Travel Station'