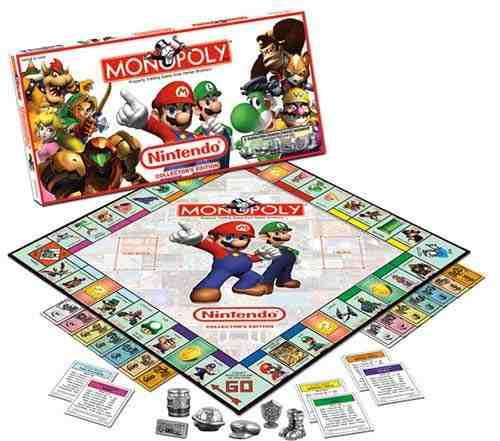 Cowbag — August 15, 2008 — Tech
References: walyou
Share on Facebook Share on Twitter Share on LinkedIn Share on Pinterest
There is now a Nintendo branded Monopoly board game. I'm torn here as I am very much a fan of traditional Monopoly, but there are so many versions out there now... Manchester United, Cardiff, Edinburgh, The Simpsons. I mean, you can even make your own Monopoly now (My Monopoly).

I can vividly remember the great monopoly row of 2006 when my lovely nephew kicked my arse at The Simpsons monopoly and kept sending my lovely silver doughnut piece to jail.

Anyway I digress. I have to say this Nintendo branded Monopoly board is actually very cool indeed. For starters, it is a limited edition which makes it more bearable.

Alas, no iron (why was an iron a playing piece in the first place?), top hat or dog. The playing tokens offered up are a Mario’ brothers cap, a Donkey Kong barrel, Link’s boots, a shield, an actual miniature NES controller, and the Koopa shell.

Shotgun the Donkey Kong Barrel! I love that guy.

With different characters having taken over the streets, I am pleased to report that the two Mario Brothers are indeed the most valued areas.
3.1
Score
Popularity
Activity
Freshness
Attend Future Festival