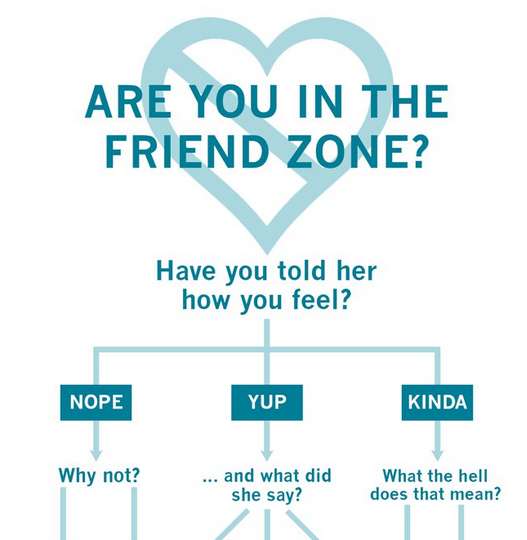 Erin Fox — September 24, 2012 — Lifestyle
References: holykaw.alltop
Many hopeless romantics often ponder the status of their impending relationship amongst that certain someone; well Nick Ross' flowchart is here is help. Ross breaks down his theory of the 'friend zone' into three simple endings; end zone, friend zone and danger zone.

For the romantics, the end zone is the most coveted position to land on. The end zone translates into love while the next ending, friend zone, keeps the flowchart user as permanent friend forever. However, the most interesting of zones is the danger zone. Landing on spots like telling the girl you love her move than 50 times, being compared to her creepy uncle and being much older than her will put you in the terrifying danger zone. However one should not take this chart too seriously and remember the friend zone can be a good zone.
5.3
Score
Popularity
Activity
Freshness

Dancing Advisory Charts
The 'Should You Dance to This Song?' Flowchart is Hilarious

Sports Fanatic Flowcharts
The 'What NFL Team Should I Root For?' Chart Is Highly Entertaining

Crazy Cat-Loving Charts
The 'Are You Dating a Cat?' Flowchart Makes You Realize Your Feline Love