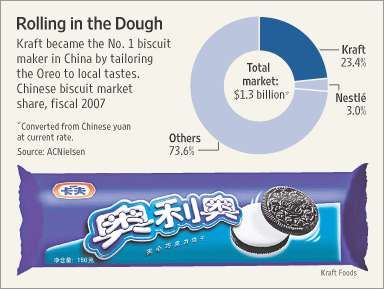 IdeaMan — May 3, 2008 — Lifestyle
References: online.wsj
Share on Facebook Share on Twitter Share on LinkedIn Share on Pinterest
Although extremely popular in North America, the Oreo cookie proved not to be so well received when it was first introduced to the Chinese market. It turns out that the Chinese generally found the original version of the cookie too sweet, the traditional round shape was very different than the more popular wafer style cookies, and the package size was simply too expensive. In response, Kraft worked its way through 20 different, less-sweet formulations until it found the right combination, and changed it into a wafer style, with four layers of cookie, filled with vanilla AND chocolate cream. And then they coated the whole thing in chocolate! I'm not sure how this thing turned out to be "less sweet" than traditional Oreos, but they look really GOOD! I would definitely try them if they were available here.

And that's not all. According to the Wall Street Journal, Kraft launched a creative marketing campaign designed by local managers, in which 300 college students "were trained to become Oreo brand ambassadors. Some of the students rode around Beijing on bicycles outfitted with wheel covers resembling Oreos and handed out cookies to more than 300,000 consumers. Others held Oreo-themed basketball games to reinforce the idea of dunking cookies in milk. Television commercials showed kids twisting apart Oreo cookies, licking the cream center and dipping the chocolate cookie halves into glasses of milk."
3.2
Score
Popularity
Activity
Freshness
Get Better and Faster