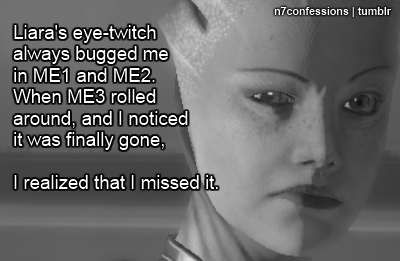 Jason Soy — April 27, 2012 — Tech
References: n7confessions.tumblr & positive-xchaos.tumblr
Share on Facebook Share on Twitter Share on LinkedIn Share on Pinterest
Mass Effect fans are notorious for their loyalty and investment in the epic science fiction franchise, so it’s not surprising that devotees have created an image macro series entitled ‘N7 Confessions.’ The meme denotes gamer experiences related to all three games of the Mass Effect series, often resulting in laughs and heartfelt moments. Whether it’s a complaint about sound issues or a coy observation about one of the characters, those who have played Mass Effect will find N7 Confessions surprisingly relatable.

The N7 Confessions image macros can be found on the Tumblr by the same name. It’s operated by three administrators: Emizombie, Octopluss and Cor7ana. They encourage fellow bloggers to submit suggestions to their growing collection, and the response has been quite remarkable. No doubt, if Garrus Vakarian existed, N7 Confessions would his favorite spot on the Internet.