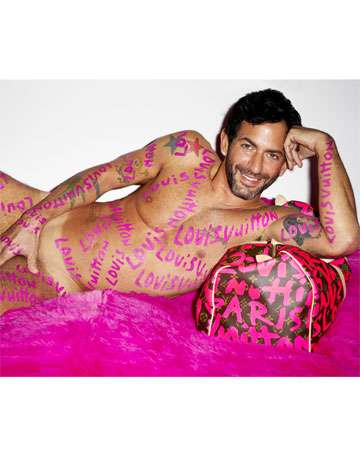 Ayman — December 2, 2008 — Fashion
References: harpersbazaar & wwd
Fashion designer Marc Jacobs is proud of his new well-defined body and doesn’t mind showing it off whenever he can.

So when it was suggested that he gets captured in the buff for a Harper’s Bazaar story about Stephen Sprouse’s upcoming collection for Louis Vuitton, Marc Jacobs jumped on the idea.

“I don’t have a problem taking my clothes off, as anybody who has picked up a magazine in the past year could tell you,” Jacobs said. “I had no qualms or shame about it but knew fully well that any full-frontal nudity wouldn’t be appropriate for Harper’s Bazaar.”

Shot by photographer Terry Richardson, I love how ‘Louis Vuitton’ is written all over Jacobs’ body in hot pink paint in a similar manner to the bag he’s modeling.

Check out the gallery for some of Stephen Sprouse LV and some of the images that Jacobs was talking about, including his body-embracing shoot in Out magazine last year.
6
Score
Popularity
Activity
Freshness

Trendy, Sustainable Clutches
These Cork Clutches are Both Eco-Friendly and Beautiful