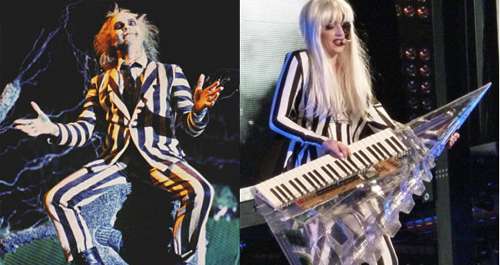 Photoblog Juxtaposes Pictures to Prove That Lady Gaga is Unoriginal

Mitchell Pert — March 6, 2011 — Pop Culture
References: ladygagaisunoriginal.tumblr
Share on Facebook Share on Twitter Share on LinkedIn Share on Pinterest
From Charlie Sheen to Saturn, apparently Lady Gaga’s copied pretty much everyone and everything. But before any diehard Little Monsters throw their paws up in defense of Gaga, I should point out that these 'Lady Gaga is Unoriginal' comparisons are all in pure fun. They’re from the Lady Gaga is Unoriginal blog on Tumblr, which is a satire of constant Lady Gaga comparisons.

Lady Gaga is known to be a trendsetter, but the release of her latest single Born This Way seems to have started the trend of criticizing Gaga’s lack of originality. Basically, people are hearing Madonna’s Express Yourself in Gaga’s new song, which has only added the the already popular Lady Gaga vs. Madonna comparisons. Even though Madonna apparently “approves” of Gaga’s single, many people just can’t seem to overlook the sonic similarity between the two songs. But what Lady Gaga is Unoriginal provides, besides LOLs, is the chance to think about where to draw the line between inspiration and unoriginality.
4.6
Score
Popularity
Activity
Freshness
Access Advisory Services