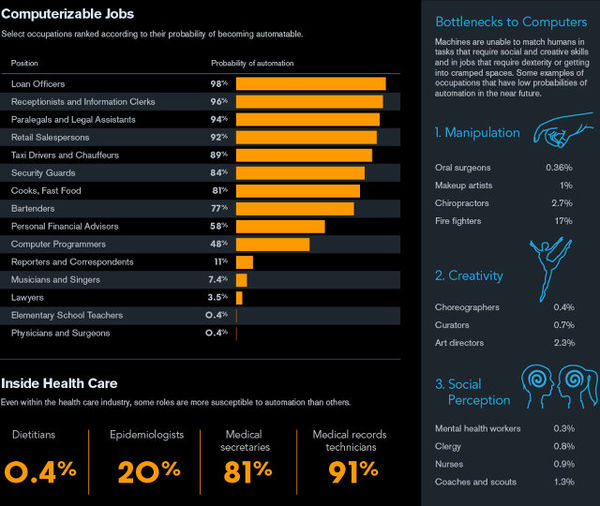 Alyson Wyers — May 26, 2014 — Tech
References: bloomberg & fastcoexist
Job automation is a threatening concept when you ask yourself one very important question: Will a robot take my job? According to a study by Oxford University, half the US workforce is under robot attack. What this means, is mobile robots and smart computers (ones that learn on the job, so to speak) make it likely that around 47% of American jobs are at risk.

A Bloomberg infographic depicts the information found in Oxford's job automation study. They do this by examining computerizable jobs and their probability of automation. Loan officers in particular are being targeted, while physicians and surgeons face a good chance of survival. If you were ever going to cave into your parents' pressure to go to medical school, this might be the time.
4.6
Score
Popularity
Activity
Freshness

Productivity-Boosting Infographics
This Infographic Depicts '9 Ways to Be Productive'