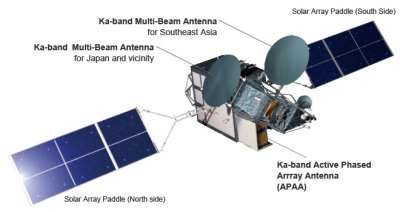 The Kizuna, which means "wind", satellite was launched and it looks like it will be capable of making broadband obsolete. They have introduced the hyper-band 1.2 Gbps - Giga Bits Per Second (Billion bits per second.) That's a tornado-like 150 times faster than DSL and 12 times faster than the best fiber connection. It cost $342 million and is expected to become available in July 2008.

"We're talking super-high speed wireless Internet communication in a country that experiences dozens of moderate to major earthquakes each year, every year," Inventorspot notes. "With KIZUNA orbiting above, uninterrupted communication can be maintained when a ground-based network is disrupted by an earthquake or any other natural disaster. Not only in Japan, mind you, but in almost any Asian country - the service will be available at 19 different locations across Southeast Asia."

Stealing, uh, buying off the web would be almost instantaneous.