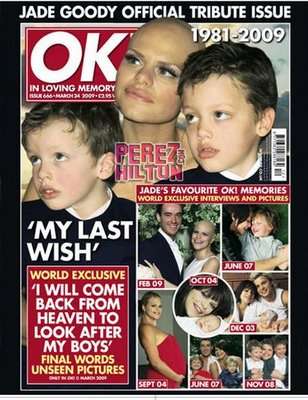 Cowbag — March 18, 2009 — Pop Culture
References: news.sky
Share on Facebook Share on Twitter Share on LinkedIn Share on Pinterest
I could write a million trends on the Jade Goody debacle. Jade is a fairly likable UK reality star who is dying of cancer and agreed to have her last weeks, leading up to the moment of her death, aired on a reality show. As sad as this is, it has turned into a total media circus as Jade (quite rightly) tries to make as much money as possible to support her two young sons before she passes away.

With Jade Goody failing fast, a UK magazine covering her story issued their tribute in a memorial issue, with black borders and the date of death (year only, clearly) while the star is still alive. It was obviously done as an attempt to boost magazine sales and ensure their tribute issue was the first in print.

While some people are in strong disagreement with the decision to cover Jade Goody’s death early, OK Magazine is defending themselves and is getting the media attention they were after.
1.5
Score
Popularity
Activity
Freshness
Get the 2021 Trend Report FREE