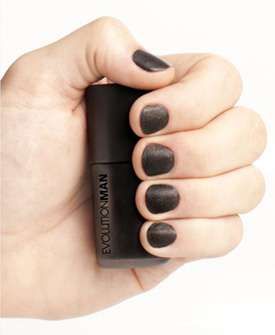 Jordy E — April 17, 2012 — Fashion
References: evolution-man & evolution-man
Share on Facebook Share on Twitter Share on LinkedIn Share on Pinterest
The beauty gurus at Evolutionman have produced 'Indashio Black,' also known as the latest in men's cosmetics. The product comes as a collaboration between the brand and fashion designer Indashio, and just as the images suggest, it is a dark nail lacquer for men. The polish is a part of a broader 'Rebel Nail Paint' collection, all of which specifically cater to a male audience.

The Indashio Black series is matte, a feature that is slightly more masculine than the majority of glossy digit looks. This collaboration also boasts the lines 3D features, present in the form of gold flecks strewn throughout the pot.

A personal care line like this has yet to focus upon a male contingent. Manicures and nail tool kits have always been directed towards women, and despite this entrenched norm, the Indashio Black collection is shifting the status quo.

Water-Based Varnish
Scotch Naturals is Free of All Toxins