Dogs of War Photography
Next
Set of
Related
Ideas 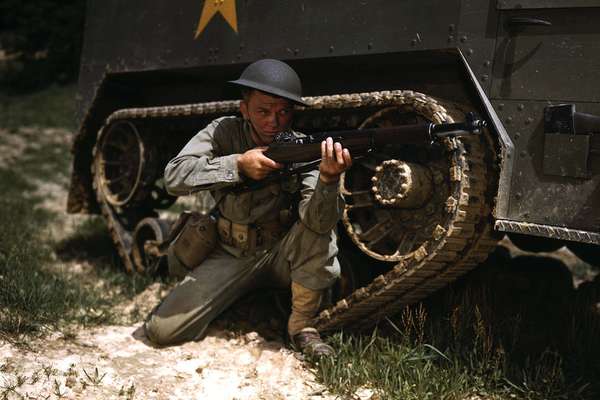 In Focus Releases the Largest Collection of Colored WW2 Photographs

Omar Yusuf — August 8, 2011 — Tech
References: theatlantic & gizmodo
Share on Facebook Share on Twitter Share on LinkedIn Share on Pinterest
Although color photography was still relatively new, American President Roosevelt passed an executive order which would ensure the public a cavalcade of snapshots depicting life, war and production in the uncertain era -- the photo historians at In Focus got their hands on those pictures for the first time.

Any documentary will make it obvious that in the mid-40s, most camera footage was still captured on black-and-white film. In the hopes of bringing us closer to a conflict most will never understand, Alan Taylor of In Focus has released over 1,400 kodachrome photographs with their original captions. The photographs, published in co-operation with the Library of Congress, mostly depict soldiers and factory workers Stateside in the midst of training or manufacturing war goods.

Historically, this is without precedent, as the modern memory of the Second World War is informed by the grainy, monochromatic footage we've all seen. Coloring or unearthing colored photographs is a habit growing in historian circles, as it provides a more engaging account of life during the most violent conflict ever.
2.4
Score
Popularity
Activity
Freshness
Attend Future Festival Virtual