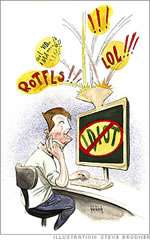 They aren't the only ones. A pair of software developers in Albuquerque are working on a "stupid filter" that screens stupid online comments the way your spam filter detects unwanted email. 27 year-old Gabriel Ortiz, a systems administrator, and his team of techies hope to release by December a free, open-source version that they hope to make available as a standard plug-in on Firefox by early next year.

Writes Fortune's Josh Quittner, â€œIf the filter were installed on a site's servers, it would intercept the comment just before it was published and flash a little alert at the author that reads: 'This comment is more or less unintelligible. Please try to restate it.'â€

Ortiz â€“ who studied linguistics as an undergrad â€“ admits that while defining stupid is subjective, his software will use standard English markers and context to judge a piece of writing. Users unable to get past the filter will then likely find somewhere else more tolerant of their LOLs and OMGs, and their tendency to repeat consonants. But isn't filtering stupidity, well, elistist? In an FAQ on his site, Ortiz replies, "Yes, it is. But that's sorta the whole point."