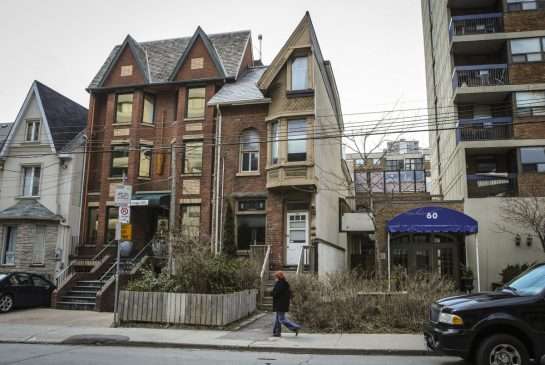 This Victorian Row Home is Literally Half a House

Lynette K. — April 25, 2013 — Art & Design
References: blogto & thestar
Share on Facebook Share on Twitter Share on LinkedIn Share on Pinterest
This 120-year-old residence is quite the head turner, since it visually appears as half a house. It tends to garner the attention of passerbys as it is one half of what used to be a semi-detached home. As a result, the residence now lacks the symmetry of the other side, thus distinguishing it from other houses located on this densely packed street, and indeed throughout the city of Toronto.

The unusually shaped Victorian row house is the result of a development battle that took place in the 1970s. The Valkos family, the owners of the home at the time, simply could not be persuaded to sell their property. Despite being harassed relentlessly by developers, the Valkoses stood their ground.

Love for the row house seems to be a popular sentiment. Its current owner, Albert Zikovitz, has no plans to have the property demolished. Zikovitz, who is the president of Cottage Life Magazine, intends to have the exterior restored and convert the interior into an office space. This suggests that he believes that the uniqueness of the house is both something to be respected and is worth preserving.
4.7
Score
Popularity
Activity
Freshness
Get the 2021 Trend Report FREE