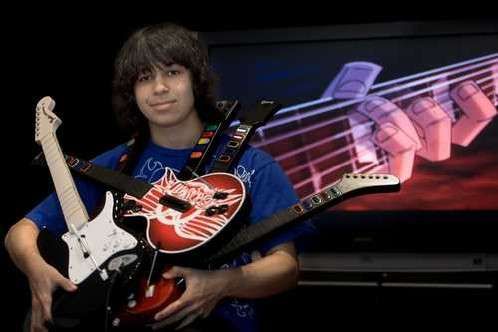 Kid Drops Out of High School to Focus on Guitar Hero

Marissa Brassfield — August 17, 2008 — Tech
References: newsobserver & kotaku
Share on Facebook Share on Twitter Share on LinkedIn Share on Pinterest
Like many other boys his age, 16-year old Blake Peebles loves to play Guitar Hero; unlike other boys his age, his parents let him quit school to focus on playing the popular video game competitively. After complaining endlessly to his parents that attending private school was a waste of time, the Peebles let Blake drop out--under the condition that he continue his education with private tutors.

Top gamers can earn more than $80K a year if they sign a lucrative contract with Major League Gaming. Most competitive gamers, however, make between $20K-$30K. Terry Lindle, a 23-year-old competitive gamer from Illinois quoted in a profile on Peebles for The News & Observer, estimates that his total gaming career pay is $25,000.