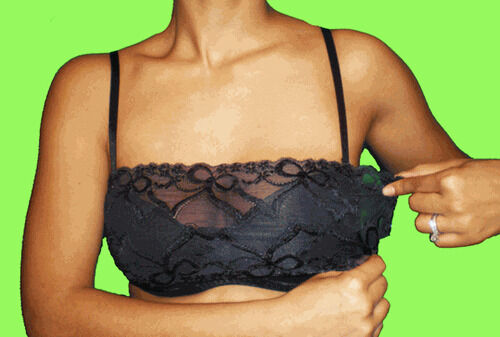 Cover Cleavage With a 'Figs' Bra

In order to create the shift to a less sex-related angle, they’ve had to relaunch their marketing campaigns and create new products. One such product could be Figs, a new cleavage covering bra.

At first that might sound a little contradictorily. If a woman didn’t want to show her cleavage, she would just wear higher cut shirts, right? In theory, that sounds great, but with the new bra by Shanelle Wenell, women don’t have to restrict their fashion choices, and don’t have to roast in the warm summer weather just because they don’t want their boobs hanging out.

The bra has removable bra covers called Figlets that, when pulled from one cup to the other, cover the cleavage like a camisole would. The advantage of having this T-shirt built into a bra is that the bulkiness of wearing a tanktop underneath is eliminated. They come in solid or lace, depending what you want to show off under shirts with plunging necklines.

Wenell, the designer of the Figs bra says, “Today’s society has gotten away from femininity with elegance. I knew I couldn’t change fashion overnight, but I could give it more relevance to women like myself and that’s what the bra aims to do, give women the choice to wear today’s fashion with a lot more elegance and sophistication.”

The Figs Bras are sort of like the bum covers we saw a while back; they act like a long undershirt or tank top to prevent thongs from poking out, yet they do so without the bunching a camisole might cause.