Fighting Fires with a DC-10 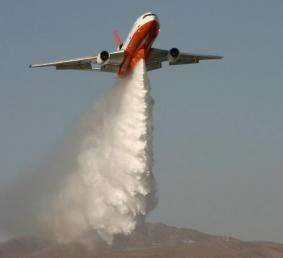 Trend Spotter — July 21, 2006 — Tech
References: gizmag
Why do forest firest seem to last for weeks? Maybe because the little planes that drop water on the fires are tiny. Now that all changes with the DC-10 becoming the airplane of choice for the California Department of Forest and Fire Protection (CDF).

"In a first for fire fighting, the [CDF] used a modified DC-10 to drop fire retardant on a significant blaze known as â€œthe Sawtooth Fireâ€. Three separate external tanks with a capacity of 12,000 U.S. gallons of retardant were utilized during the two separate flights by Tanker 910 so it could build a buffer of retardant between the Fire and the community of Big Bear while allowing ground crews to get in position to build a containment line. The modified jet is one of two new jet-based services which were vying to be the first to demonstrate their effectiveness. The jets are a new tool developed in recent times to combat the destructiveness of fire in the United States where annually there are 80,000 wildland fires which destroy around six million acres and cost US$1.2 billion in fire suppression costs. The true cost of wildfire is much higher as when timber, tourism and property losses are added annual figures run near to US$10 billion." - Giz Magazine