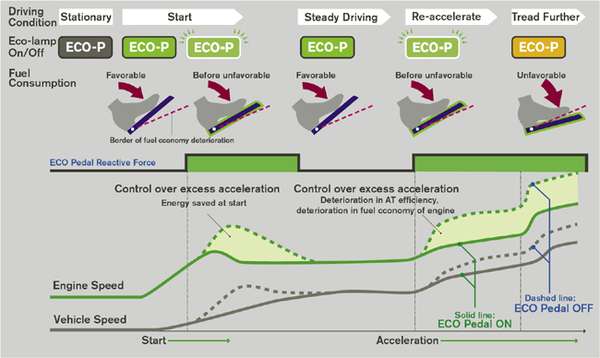 IdeaMan — August 7, 2008 — Autos
References: nissan-global
Nissan has developed what they claim is the "world's first Eco Pedal", a device designed to help drivers become more fuel efficient. Basically, it works with the car's computer to determine the optimum fuel usage rate, and actually pushes back on the driver's foot if it thinks they are using more fuel than necessary.

According to their website, another feature of the system is visual feedback to the driver. An "eco-driving indicator incorporated on the instrument panel indicates the optimal level for fuel-efficient driving. Driving within the optimal fuel consumption range, the indicator is green. It begins to flash when it detects increased acceleration before reaching the fuel consumption threshold and finally turns amber to advise the driver of their driving behavior."

I'm not sure I would like such a device in my vehicle. I would think it would be very annoying if it started pushing back when, say, you're trying to pass a truck on a hill. Fortunately, the system can be turned off by the driver when not needed.

I think a better use for it would be to remind teenagers or other new drivers to slow down. Or maybe it could work in conjunction with the new collision avoidance radar systems being installed on some cars and push back if the driver starts tailgating the person in front of them.
1.5
Score
Popularity
Activity
Freshness