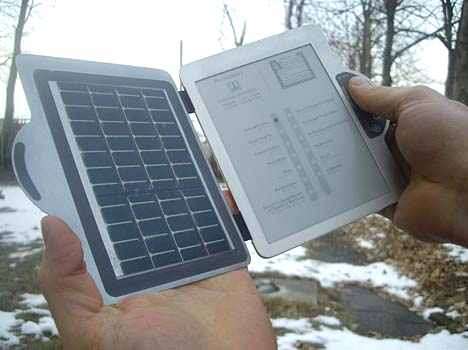 Carl Hose — February 11, 2009 — Eco
References: teleread.org
Share on Facebook Share on Twitter Share on LinkedIn Share on Pinterest
The idea of a solar-powered e-book reader has been around for some time, but now there is a workable prototype that looks like it could actually make a dent in the e-book market, even going up against the likes of Amazon Kindle and the upcoming Indigo Shortcovers Smartphone reader.

Holly Gates ran across an article that raised the possibility of solar cell covers to help power E-Ink machines. That, in turn, suggested the idea for an e-book reader that would rely on solar energy and other light sources.

Holly developed Snippy and built a working prototype that was both portable, green friendly, and offered high-quality display capabilities along with bluetooth technology for transparently linking to other Snippys for sharing content.

It’s been suggested the Snippy, if actually mass produced, could retail for as low as $50.
2.6
Score
Popularity
Activity
Freshness
Get Trend Hunter Dashboard