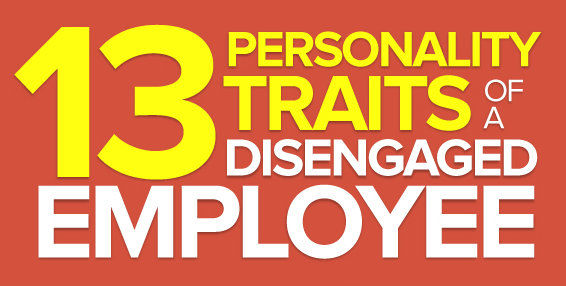 Alyson Wyers — June 5, 2014 — Business
References: officevibe & designtaxi
Share on Facebook Share on Twitter Share on LinkedIn Share on Pinterest
In the workplace it's likely we've all encountered someone who just doesn't want to be there, but it can be more difficult to identify chronically disengaged employees. This infographic from Canadian startup company Officevibe indicates the 13 personality traits of an unengaged worker.

While this list is by no means a comprehensive list, they do note qualities like complaining, lying and being irresponsible, while also including independence and being a know-it-all. According to the infographic, ultimately disengaged employees do not support good company culture. They suggest people who do not understand the importance of company culture should be let go because they will only drain other team members.

Although, it is also worth saying that terrible employees are almost always disengaged, but disengaged employees are not always terrible people.
6
Score
Popularity
Activity
Freshness
Get Better and Faster